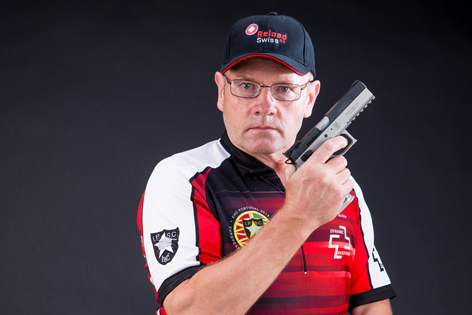 Peter was born in Basel, Switzerland, on 29 December 1958. After completing school, he learned the trades of carpentry and roofing. In 2000, Peter was able to realise his dream by building a training centre for dynamic shooting in his home. Every year since 2002, he has organised a variety of competitions at this range, where he also offers various courses as a shooting instructor. In 2012/2013, he also qualified as a diving instructor. Today, Peter manages his own consulting and management company, Luminous Management GmbH.

Peter did not start shooting until the age of 30; fascinated by all disciplines, be began shooting pistols, revolvers, shotguns and rifles. But it soon became clear that pistol shooting was the division for him, and he's been a member of the Swiss National Team for over 20 years. The fact that he's a World Champion, European Champion and 16-time Swiss champion testifies to his constancy in the IPSC scene. He wants to continue shooting and pass on his experience to rising new talents. Promoting young shooters is a is particular passion of his.