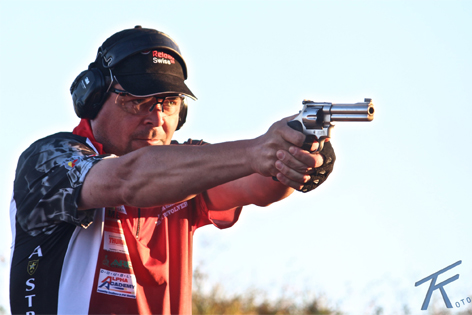 Gerald, 43, is an IPSC shooter in the IPSC Austria Region. Gerald started shooting in IPSC in the Standard Division in 2006. After two years, he moved to the Production Division, where he competed successfully until 2012. As a Production shooter, he won numerous President's Medals (in Austria, Germany and Canada).

In June 2012, he shot his first international match in the Revolver Division. He entered the Extreme Euro Open 2012 to test himself internationally in the run-up to the European Handgun Championship 2013. In his first time out, he succeeded in placing second in a field of extremely strong international competitors. Following the EEO 2012, he began devoting himself intensively to revolver training. In Autumn 2012, just months later, he won his first level-three match in the Revolver Division in Germany. From that point on, he shifted his focus entirely to revolver shooting in preparation for the EHC 2013. In 2013, this success story culminated in his winning the ECH in the Revolver Division and becoming European Handgun Champion. As a member of the Austrian National Revolver Team, he took second place in the team competition.