The Rheinmetall Group uses cookies saved to your device in order to optimize and continuously improve its websites, as well as for statistical purposes. Further information on our use of cookies can be found here , together with our publication details and data protection notice .

All commonly available muzzle-loader replicas, as well as most modern inline muzzle loaders from the US, are prominently labelled “Black Powder Only”. The safety warnings also expressly warn against using smokeless powder. So what’s the purpose of this article? Isn’t it extremely dangerous to shoot muzzle loaders with modern smokeless powder?

Yes it is! Particularly when certain rules are not observed. Just as when reloading cartridges for breech loaders, these include using a suitable powder, strictly observing load quantities, the right primer, the right bullet – particularly the weight – and so forth. Essentially, a muzzle loader is a rifle that uses caseless ammunition, is designed for a specific ignition mechanism and pressure and is loaded prior to each shot.

Are there any muzzle loaders that can also be shot with modern smokeless powder as well as black powder? Yes. American firearms maker Savage® Arms in Westfield, Massachusetts, USA, manufactured the model 10ML II for several years. This is a .50 calibre inline muzzle loader designed for various types of smokeless powders. It is capable of achieving muzzle velocities of up to 700 m/s for saboted spitzer bullets up to 300 grains (19.4 g) and is fired using type 209A primers (shotgun shell primers). Among other propellants, the user manual references powder types commonly used in the US, such as IMR® SR 4227 and SR 4759, Vihtavuori® N110 and N120.

The illustration below shows the Savage® Arms 10MLII with a laminated beechwood stock of my own making, which is modeled on 19th-century Stutzer target rifles (Fig. 1: 10MLII is the bottom rifle). 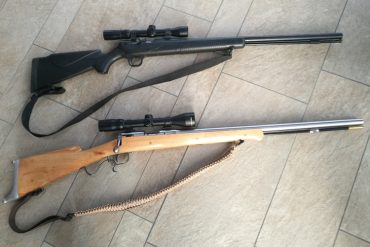 The 209A primer is placed on the front of the action and inserted in a matching recess in the breech plug of the barrel before firing. 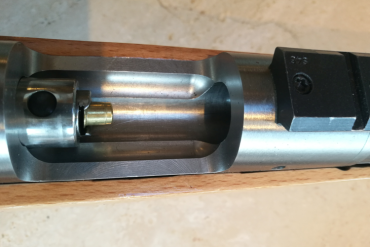 Figure 4 shows details of the home-made bullet mould after frequent use. 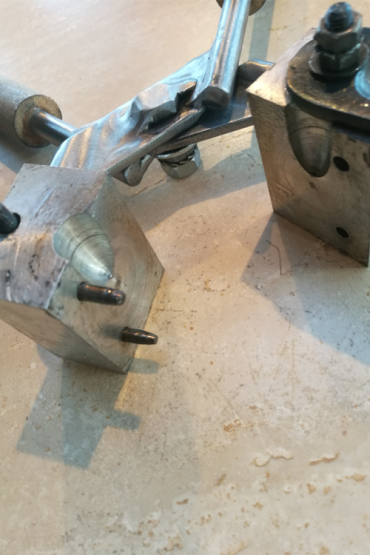 As you can see, muzzle loaders that can be loaded with smokeless powders actually do exist! However, the recoil generated by a full load is substantial! Consequently, I tried out various smaller loads for IMR® SR 4227. I measured a muzzle velocity of 450 m/s using 35 grains (2.27 g) and a muzzle velocity of 350 m/s with 28 grains (1.81 g). The recoil was much softer.

The down-side, however, was that the reduced loads did not burn completely; a few unburnt powder grains remained in the barrel. This was more apparent with the 28 grain load. Additionally, the loads did not reliably ignite. As with all my muzzle loaders, I always shoot a blank percussion cap or primer before live loading. In the first shot, the pressure from the primer often pushed the bullet down the barrel without igniting the charge. This problem usually does not occur after the second shot, after the barrel has received a coating of smoke residue.

To solve this problem, I first wrapped a thin, single-ply strip of paper around the bullet to create greater resistance to being pushed down the barrel. That solved the problem, and the loads ignited reliably. However, I found this loading process too cumbersome, and I missed the convenience of the relatively smooth loading procedure for the full load. The alternative was to additionally “wad up” the bullet/sabot. After several attempts, I succeeded using three sheets of single-ply toilet paper. The three individual “wads” add hardly any weight and hold the bullet securely seated during ignition.

I have tried out both 28 grains and 34 grains, and measured velocities of approx. 350 m/s and 460 m/s. Here as well, the measurement results agree very well with the simulation.

In addition to the Savage® Arms 10MLII I also own a black powder inline rifle made by CVA®, Duluth, Georgia, USA: the Buckhorn model in .50 calibre (top rifle in Figure 1). It too is ignited using 209A primers and is an extraordinarily simple design. Figure 5 shows the breech plug, firing pin, firing pin spring and the locking screw of the spring, while Figure 6 shows the retracted/cocked firing pin and the screwed-in breech plug. The rifle is designed for 150 grain (9.7 g!) magnum loads of black powder. Shooters are warned not to use smokeless powder. 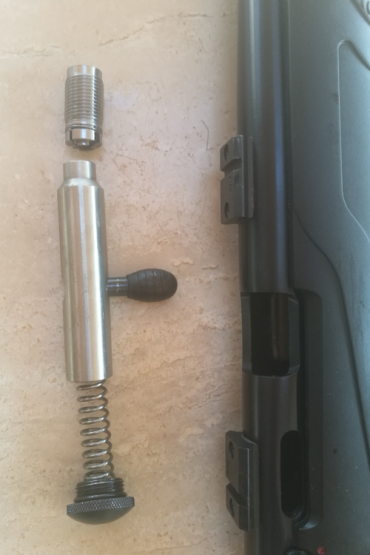 The pressure resistance of the barrel and breech plug are decisive. CVA does not specify a shooting pressure. Furthermore, it is difficult to find reliable pressure data for black powder weapons on the internet. So I base my conclusions on experiments that I carried out several years ago with a variety of black powder types in a short shooting block using a peak gas pressure meter. At that time, I measured up to 1400 bar. This is comparable to the pressure to be expected from, for example, a Vetterli cartridge from 1869, which was loaded with black powder and with cordite. I took the data of the Webley revolver as a first approximation, which was also shot using black powder and cordite. It is certified for pressures up to approx. 900 bar.

Consequently, I repeatedly tested the die CVA Buckhorn with 34 grains (2.2 g) RS36, a 300 grain (19.4 g) .452 bullet, 209A primers from RWS and a remote trigger in an indoor shooting range. As described above, the load was wadded with three sheets of single-ply toilet paper. I expect a maximum pressure of approx. 750 bar from this load. The rifle passed the test with flying colours.

The pattern of the fired primers was also OK; they showed clear gunshot residue but were intact and comparable to fired primers from the Savage® Arms 10MLII for similar loads or black powder loads of 80 grains (5.2 g) of black powder no. 3 in the CVA® Buckhorn.

Figure 7 below shows the load components primer, sabot, bullet, RS36 measured out in a transport container made of PVC tubing with wooden stoppers, three sheets of toilet paper and powder measure. 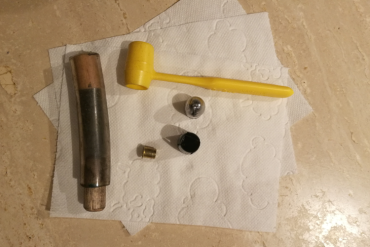 Figure 7: Primer, sabot, bullet, RS36 measured out in a transport container made of PVC tubing with wooden stoppers, three sheets of toilet paper and powder measure.

Finally, a note on the shot group for these loads: I shoot the Savage Arms 10MLII standing at a distance of 50 m at the same (competition) black powder target as I do, say, my 1851 Martini action in 10.4 mm or a Vetterli rifle. I am only a moderately good shooter and seldom achieve shot groups below 7 (out of 10). So this rifle shoots more accurately than I do.

To sum up, I would like to add that you certainly can shoot modern smokeless powder – e.g. RS36 – in modern inline muzzle loaders designed for 209A primers on your responsibility and with all due care, a fact that is probably not widely known.

In addition to the possibility of adapting the load simply to varying circumstances, I also appreciate the significantly easier cleaning after shooting. There are virtually no residues, oil cleaning is sufficient. My cleaning sequence for my black powder weapons is: hot water with soap, methylated spirit (to remove the water), penetrating oil and gun oil. What a difference!

For replicas fitted for traditional percussion caps, or even flintlocks or matchlocks, however, I urge you not to experiment with smokeless powders at all. Please also note that it is your responsibility to observe the regulations covering the use of muzzle loaders, and I am not responsible for your actions.

Notice regarding data transfers to the USA

Of course, we will always respect the do-not-track (DNT) setting in your browser. In this case, no tracking cookies are set and no tracking functions are loaded.