I recently received a phone call from Reinhard Lang, a universally recognised top shooter and winner of the 2015 F-class Open European championship in Bisley (UK). We had quite an interesting conversation. He described a .308 Win application with R52 over 300m and how extremely impressed he was by the precision it achieved. The seven-shot group had a vertical spread of 22mm without adjusting the sights. The horizontal spread was even less. A little later, the shooter sent me the load data: 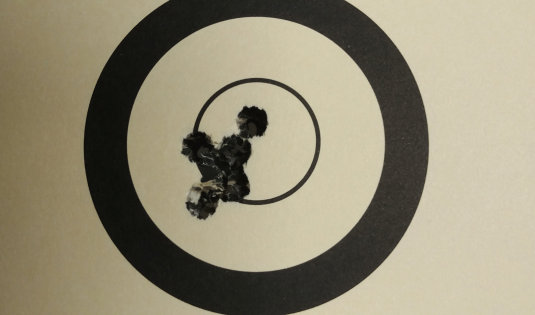 When I look at this load, two things jump out at me. Firstly, the cartridge is fabricated slightly longer than the CIP length (73mm, as opposed to CIP 71.12mm). We have ruminated on the importance of the cartridge length in other columns. The second thing that jumps out at me is the moderate, balanced load of 43.8 grains RS52. We could easily increase this by another 2 grains without running any major safety risks. Which brings me to my point: Is an extended bullet path the same thing as greater precision? My impression: Sometimes it is, but a lot of times it isn’t. As we see it, the entire system of weapon, ammunition and propulsion is always involved. We presume that the propulsion, consisting of the primer and propellant powder, accounts for about one third. We often see formulations that deliver extremely precise results with moderate loads; occasionally, we also see extremely powerful cartridges that still deliver unsatisfactory precision. This column is also intended to highlight the benefits of single-base powders (RS12, RS20, RS30, RS36, RS50, RS62), which can deliver excellent precision in spite of having a bit less power.

I’d like to round out this column with a thought on the popular 6.5 Creedmoor calibre. In this calibre, RS60 delivers an extended path, top performance and superior precision. But RS62 is also very popular and has produced some very good-looking shot groups. And an extended bullet path with a high initial velocity can have a positive effect, but this does not always have to be the case. Sometimes in our vocation, less is more.

I hope my observations can help you to make your ammunition even more precise. I wish you great satisfaction experimenting and shooting.

With best regards from Wimmis,